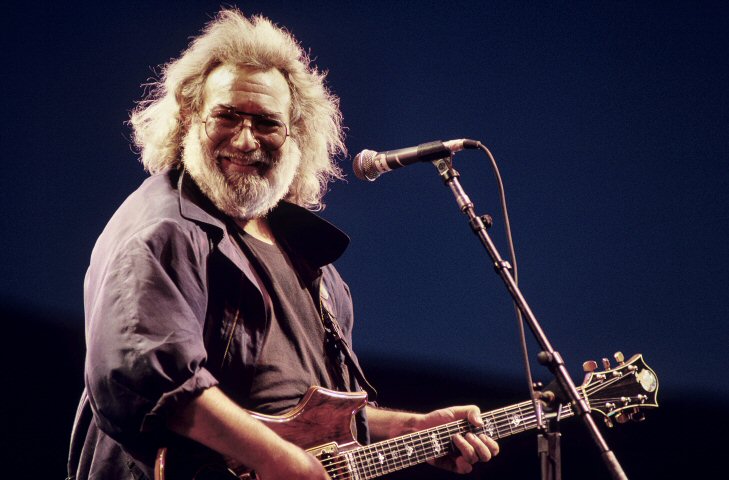 It’s the first of August once again and today we celebrate Jerry Garcia’s birthday.

This year, I’d like to share with you a video of one of the many great moments I had the fortune to experience live. This version of Shining Star by The Manhattans was performed by the Jerry Garcia Band at Hampton Coliseum on November 19, 1993. It’s a slow song but was deeply moving to be present as the audience sang to Jerry and he sang back to us. Put this on and enjoy.

When there are great upheavals in our lives, our culture, or our nations, they indelibly mark the calendar of this eternal time line that is the human race. For instance, anyone in the United States over the age of fifty could probably tell you where they were and what they were doing the day John F. Kennedy died. If they were forty or older, most could probably recount how they woke to the news that John Lennon had been shot. And of those, I would hazard a guess that many could probably recount how they went on to spend the rest of that fateful day. Some might even be capable of dialing in to the minutiae of the day, what they ate or the weather. These events do not have to be deaths either; they can be joyful celebrations, such as the first man on the moon. Or they could be somber reflections, such as those that settle at the conclusion of a war. Fifteen years ago today, one of these very happenstances marked a great many people, those that considered themselves part of a magical Tribe. That wonderful family carved out of chance, hope and the love of the unknown; these were Deadheads. And of course, you now know I speak of the passing of Jerome John Garcia, or as we affectionately call him, Jerry.

On that fateful day, fifteen years ago, I found myself running around Vancouver with my girlfriend, picking up groceries and supplies for a trip out to one of the islands. We had recently come off that summer’s Grateful Dead tour, one that, now looking back, had been marred with incidences and bad omens at every stop; a dark storm had been brewing. As I flicked on the radio, now stuck in rain and traffic, to my surprise the Grateful Dead’s Trucking came blaring out off the FM dial. I say surprise, because the Dead were not your radio friendly staple, especially around these parts. At its conclusion, another Dead song, Sugar Magnolia, came crunching out on the airwaves. Well, this was odd, but I chalked it up to the “daily double shot” or some other new fangled radio marketing lingo used to rile up daytime callers. But when this was followed by the tenderness that is Box of Rain, the signal rang true.

Without saying a word, I reached down and turned the tuning knob. Sure enough, the next closest rock station was playing the Grateful Dead. So this is how I would learn of Jerry’s passing, not with words but with song. Appropriate, for honestly, who would want to hear that a member of their family has passed while watching a news channel’s talking head read a teleprompter. I turned to my girlfriend to ask if she had her passport, which was needless as the entire contents of our lives were packed away somewhere in that van. Maybe I simply needed confirmation of our next move. Her welling eyes directed me to the next exit off the highway and there we were, headed for San Francisco. There had to be one last show, one last celebration; please, just one last ride……… END_OF_DOCUMENT_TOKEN_TO_BE_REPLACED

This post originally ran on August 9, 2007.
On this, the 15th anniversary of Jerry’s passing, I feel that it captures my thoughts well enough that I’d like to share it with you once more.

12 years have flown by since Jerry Garcia passed.

Nations have come and gone. Guitars grown silent and new players risen. Friendships and love affairs both dissolved and formed. My daughters born and one grown into a young woman, already… and too soon if you ask me. Yet, the world keeps turning.

Looking back to that day, when the news spread from phone to phone and head to head, I can vividly recall the feeling that I’ve felt more than a couple times in my life. It’s the feeling of being punched in the stomach- without the pain yet with all of the breathlessness- combined with the dizziness of a headwound and the crushing weighted sensation akin to wearing one of those lead aprons they use at the dentist’s office. I had gone to work at the record store before hearing the news and, I’d stayed because I didn’t know where else to go.

Through the plate-glass I could see the world and its unceasing activity and, inside my head, I screamed for it to stop. I begged the world to freeze in place and pay notice to his passing. Didn’t they know what the world had lost?

Of course, they didn’t. Had they known, as I and so many hundreds of thousands know, they actually would have stopped and marked the day. They would have bowed their heads or lifted their arms or clenched their eyes tightly or all of the above and given thanks and voice to their sorrow for the fact that Jerry Garcia lived, gave his music to the world, and on that day, could give no more.

Yes, we saw it coming. On our less-than-blindly-optimistic days we certainly would not have expected him to live to 65. But no matter how much you think you’re ready… You never are. Not really.

That was a hard month. Not long after Jerry passed, something unexpected arrived in my mailbox. Actually, it was not so much unexpected as it had been forgotten. Earlier in the year, Jerry and his side band had recorded two songs for the soundtrack to the film, Smoke. In a mailer from The Grateful Dead or, perhaps in Relix magazine, I had spotted an offer for a free videocassette of the music video for one of the songs. Although it was noted as a very limited offer, I sent away and promptly forgot. That is, until one day, I opened my mailbox and found a mailer inside.

I rushed inside and popped in the video as I read the enclosed note. The note said that they had been flooded with requests after Jerry’s passing and that I was one of the ‘lucky few’ whose request they would be able to fill. The music started and I saw his face and I cried. It was not the first time I’d cried since that day, twelve years ago, when Jerry passed. This time, however, was the first time my tears could resolve into a smile. Things would get better. Life would go on. Tears are normal.

As they say, “When a lovely flame dies, Smoke Gets In Your Eyes.”
[youtube]http://www.youtube.com/watch?v=DEuJqlrfEZ0[/youtube]
Incidentally, this is the last studio recording Jerry did and, it was written by his namesake: Jerome Kern.

And it still makes me cry.