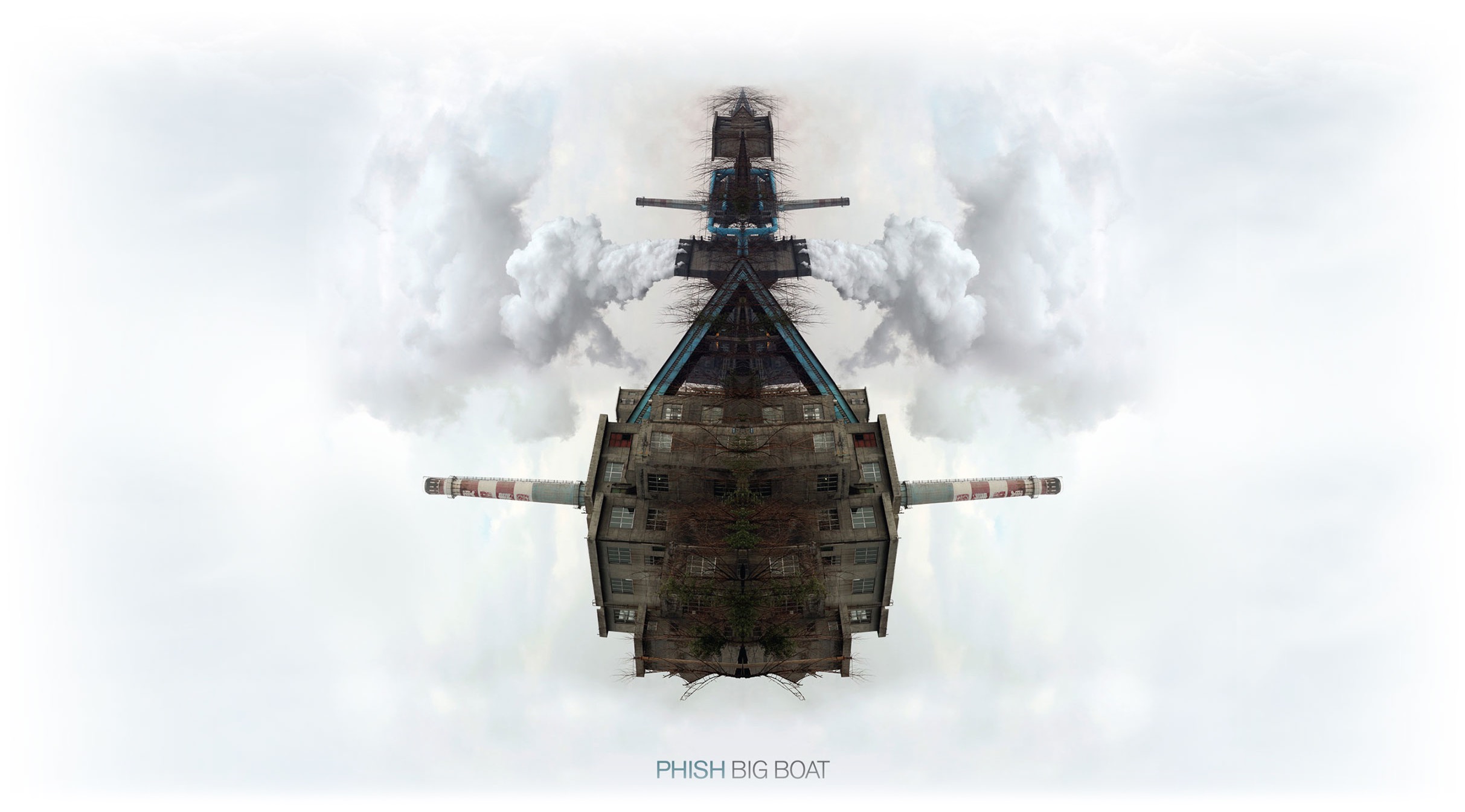 The album opens with “Friends”, a galloping bit of thunder, sung by drummer, Jon Fishman. Fish is no Pavarotti but he capably intones his thoughts on messiahs, space aliens, and our collective fate. That collectivism is, according to Anastasio’s recent promotional interviews, part of a broader view of the band and their connection with their audience. We’re all in this together on a figurative and titular Big Boat. Deep. The music is heavy and catchy and, despite the nonstandard lyrical structure, might even worm its way into your ear. I was wary at first but I’ve come to heartily embrace this tune.

“Breath And Burning”, the first “single” follows. NPR music appropriately dubbed it “breezy” which is not an unfair assessment. In tone, it comes off a bit like a sequel to the Trey Anastasio Band number, “Drifting”. The lyrics are a bit more serious, with references to lightning and partying as the hurricane roars outside. The horns lift the arrangement up a bit from this Summer’s live renditions and make a strong case for Phish’s time spent in the studio.

Page McConnell’s first track on the album is “Home” which taps into something about his own life. Here we begin to see the results of, producer, Bob Ezrin’s direction to write more personal, emotional songs. We also get some damned interesting music. The verses and refrain are uptempo and somewhat slick but the outro is dense, high intensity rocking (with a nice breath-catching choral break just because.) This is some strong and heavy playing and a real treat.

Trey’s “Blaze On”, a toe-tapping, good time, groover with some obvious Grateful Dead influence comes off well in the studio. Pop Phish, perhaps? It’s a very listenable and familiar sound. With a bit of gear shifting, we next come to “Tide Turns”. When I first heard “Tide Turns” during the Summer tour, I knew that it needed horns. The arrangement they brought to the stage seemed to ache for some brass to fill in the holes. Sure enough, the studio arrangement is a brass laden ballad that works far better than the sparse arrangement from this past Summer. If I had my way, this track would have been recorded at Daptone studios but, that’s not a knock on what’s delivered here. Phish show their chops and taste with a well measured dose of something many detractors have long found lacking in the band: soul.

The needle swings from slick production to home demo when “Things People Do” picks up. Recorded by McConnell at home with an iPhone placed atop a Wurlitzer piano, this number is fresh and simple. The mechanical clatter of the keys at the same volume as the piano tones and Page’s simple, folksy, vocal delivery give this an old-timey vibe (anachronistic “Pinterest” reference notwithstanding).

Mike Gordon gets into things with his bizarre song about vacuuming entitled, “Waking Up Dead”. As with many of Gordon’s songs, there’s a lot to unpack here and, as many times as I’ve been through it, I can’t say that I’ve fully grokked the intent just yet. But I have come to really love the melody and groove. Page deserves a shout-out for the funky clavinet on this one, too. It’s got a good, Gordon-esque, hook, and a penchant for sounding out all of the u’s in “vacuuming”. Weird, but good.

Trey brings us back to earth with a charming, though dark, acoustic number, “Running Out Of Time”. This belongs in an acoustic set of songs that, collectively, might make someone wonder about your well being. Trey has indicated that it comes from a dark place in his past and you can hear that. This is more of the Ezrin influence on emotional songwriting, I expect. The result is solid while the song itself is rather ethereal and brief.

“No Men In No Man’s Land” stands in direct contrast. This funky tune has stood out in recent tours and is excellently realized in the studio. It’s a swaggering groove with swinging horns and a catchy refrain. Only because it’s such well executed funky rock, does it occur to me that NMINML, like “Tide Turns” would be awesome if produced for Daptone Records. That horn section and that live, analog, studio sound are the only ways I’d consider improving on this recording.

Trey dips back into the emotional well with the earnest ballad, “Miss You”. In a recent interview (to be heard on an upcoming episode of the Helping Friendly Podcast) Tom Marshall acknowledges that, in songwriting, there is a fine line between relatable emotion and schmaltz. Here, Trey toes that line in writing about his late sister. The result is a very relatable and stirring song. His solo also captures that emotion, creating a song that packs an emotional wallop.

Page’s next song, “I Always Wanted It This Way” dries the tears and lifts off to skim the stratosphere. This has a tone and sound that feels a bit like a sequel to a Vida Blue or his more recent solo record, Unsung Songs And Movies Never Made. The drums are brisk and synthesizer sweeps are suggestive of low Earth orbit. The lyrics touch on relationships, referencing trust building and physical and emotional distances. This, too, is one of the more captivating full band performances on the record.

“More” is another bit of modern Trey Anastasio songwriting (Tom Marshall is co-credited on “Blaze On”, “Running Out Of Time”, and “No Men…”). With sentiments a bit less bare than on “Tide Turns” or “Miss You”, Trey sings of searching for meaning “in a world gone mad” and builds from a dead stop torch song intro to an uptempo anthem in a brisk four minutes. I expect this to be a strong rave-up on the Fall tour. The album could have ended there. At fifty-four minutes, in the Seventies, it would have been a bit long for a single LP. But, here in the post-CD era, we stretch things a bit further. This makes room for “Petrichor”.

A gentle prog-rock composition, fleshed out with strings, percussion, and a great many notes, “Petrichor” was reportedly composed with Phish in mind. Its first incarnation, however, came several years ago as an orchestral work. This arrangement falls somewhere in between that and what we will eventually hear live from the quartet. Each player has his work cut out for him in the piece and, while I do enjoy the violin passages, I can’t help but wonder how these will be arranged without the strings onstage. There are lyrics here, too. As the name suggests (petrichor is a word poets might use to describe the scent on the air after a rainfall), the song is about rainfall and transitions. The rain washes away the past leaving a crisp, fresh, today. It comes together well in a fashion reminiscent of “Atom Heart Mother” (with far fewer horns) and, while, not the edgiest of compositions in the catalogue, it certainly demonstrates that Phish’s ambition is still in play.

And it is ambition that drives them to keep returning to the studio. Not necessarily ambition to make the world’s greatest record, rather they aspire to express new and different versions of Phish albums. Gone are the days of twenty-somethings performing acrobatic feats with their instruments (though they still use the trampolines on “You Enjoy Myself”!) Big Boat presents a Phish that is ready and willing to talk about the world within themselves and, in doing so, they hope to carry us along a bit further on our journey together. It may not be the record that all Phish fans (or mainstream critics) want, but it’s the record they needed to make.

Went to the mountains to rearrange my mind.

Nice drop from @woodsist including @paintedshrines